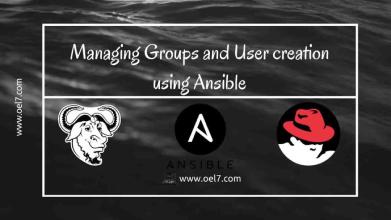 When Ansible helps me?

Why we use Ansible playbook? We have hundreds of Linux servers and requirement came in our email stating” Babin create below users in all Linux servers by referring attachment with approved given privileges” Oh no it takes time.

In fact, it takes time for manual intervention to create user accounts across number or servers. So we have decided to create an ansible playbook to automate the task in remote servers with specific UID, GID, “Gecos” information, Shell and user passwords. This is how we have managed to create the groups and users in remote servers using Ansible. Let see how can achieve this.

To read about more topics on “Ansible” you can refer to the below links.

Here we are using an empty password for the user  “guest001” and force him to create his own password at first login.

If we need to create and use the password in Ansible playbook better we need to stick with encrypted hash passwords using python or using the mkpasswd command.

Above all tasks can be done using ansible playbook. I’m running this playbook using the command.

Watch the video when we run the playbook.

That’s it we are now good to go for any number of servers by replacing host group name “linuxsysadmins” in a few seconds we can achieve our user creation requirements.

We have managed to create the number of users and groups across remote servers, it’s pretty easier to create with a playbook for our daily tasks, Hope this helps you. Provide your feedback and improvement plans by commenting in below comment section.