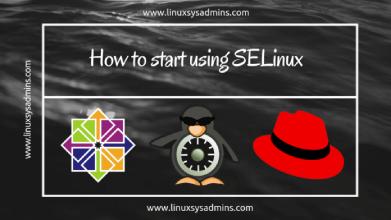 SELinux, Most of the new Linux users will disable once they start with the post configuration. Actually, you are loosing once of precious security feature in Linux by disabling it. Instead of disabling it why can’t we learn and manage SELinux? This guide will make yourself familiar with it in all the way.

SELinux or Security-Enhanced Linux is one of the security Layer in Linux provided by a Security module. In 2000 the initial version released and available under GPL licence. The Authors are the National Security Agency (NSA) & RedHat. SELinux only available for Linux operating system and written in “C” language.

What is the use of SELinux?

SELinux is one of important security layer in Linux which protect the directory, files, process and ports with its own labels by preventing access to other users or processes. For example, by default, a web server up and running with a standard port and directory they have their default labels (httpd_sys_content_t:s0), FTP service running in the same server can’t access the Web server owned ports, files and processes.

Packages and Dependencies of SELinux

SELinux will be enabled by default while the server installation, the package policycoreutils and their libraries libselinux-utils will enable the SELinux up and running. The additional management packages policycoreutils-python can be installed later while our requirement comes in.

There are three types of modes and they are as follows

To change any modes persistently we need to edit configuration file /etc/sysconfig/selinux and change the mode. Once the changes are done we required a reboot to relabel the whole system.

Checking the Status and Running SELinux

The configuration file of SELinux will be under /etc/sysconfig/selinux, to temporarily disable it can be achieved by running below command, this will change the mode to permissive. In this mode, the rules will not enforce to active instead it will log everything.

To change back the mode to active or enforcing mode run

To verify the current status run

Let us explore the available files, directory and ports default preconfigured labels of SELinux. To list the available Labels for files and directories

The output will be very long with fcontext, type and Context. Use grep to sort only the specific context from the long output.

To know the ports replace “fcontext” with “port“.

All the ports will have a label as shown below.

All files, directory and process will have labels as shown below. To list the context just we need to use a capital “Z” while listing files or folders.

Booleans are if then else rules written in SELinux policy which used to customize the policy rules for any requirements like allowing FTP to use home directory or to allow FTP anonymous user to write. Booleans can be set using two methods.

The current status of boolean is in the off state.

Check the current status after enabling the boolean.

To list the current status use get command with “-a” to show all booleans. Use grep to filter a keyword.

To set a boolean use “on” or number “1” to turn off the boolean use “off” or “0“. The option capital “-P” make the changes persistent across reboots.

To change the context temporarily we can use “chcon” command by following with option and arguments. This changes will be restored to original context when we reboot the server or when we run “restorecon” command.

In below example, we are recursively changing the context of web servers root directory /srv/www/html/ with “ftpd_exec_t” once we run restorecon it will revert back to the original context.

Wrongly assigned with a context

Restoring to the original context.

This will help a lot when we do some troubleshooting.

Now let us see how to label a file, directory and ports. In this example, I will use /srv/www/html as my web servers root directory and expose 8010 port for serving web contents.

To remove a context use “-d” by replacing “-a” and rerun the command.

The output of above commands for your reference

Now the /srv/www/html have httpd_sys_content_t context let us try to touch a file inside html/ and verify the default context.

Verify the context for the newly created file.

Labelling a Port in SELinux

To serve the web content through non-standard Apache port first we need to label it. Let’s start to list and filter.

To revoke the port replace “-a” with “-d” and rerun the command.

At last, verify and confirm

Output for your reference

Hope we are good with knowing SELinux now. Red Hat provides a cool colouring book about SELinux have a look into it.

This Brief guide on how to use SELinux may help you to understand with clear examples. Let us continue with our troubleshooting guides in future write up. If you learned something new today your comment in below comment section will give us a boost to provide more on how-to guide on SELinux.